Vinnie is a character in Spaceballs played by Rudy De Luca. 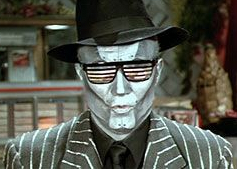 Vinnie is the robotic Mafioso-like subordinate of Pizza the Hutt. Vinnie is loosely modeled after Max Headroom, and appears to suffer from some sort of mechanical glitch which often causes him to twitch between sentences. He dresses like a stereotypical mobster, wearing a formal striped black suit, black gloves, sunglasses and a fedora. He seems to enjoy eating his boss's cheesy body.

By the end of the movie, Pizza the Hutt is killed when he was trapped inside his limousine and ate himself to death. It's unknown what became of Vinnie afterwards, although it's likely he either became unemployed or was made the new head of Pizza's organization.

The name for this character was actually inspired by DeLuca's brother Vincent Thomas DeLuca. Rudy, being longtime friends, with director Mel Brooks, requested this as a small favor to pay homage to his brother.