View source
watch 01:36
We're Getting Mutants in the MCU - The Loop
Do you like this video?
Play Sound

" I am Princess Vespa, daughter of Roland, King of the Druids."

Princess Vespa is the spoiled daughter of King Roland, the princess of Planet Druidia and Heir Apparent to the Druidian Throne. she almost married Prince Valium but married Lone Starr instead and is the spoof of Princess Leia. In both Spaceballs and Spaceballs: The Animated Series, she was played by Daphne Zuniga.

Princess Vespa is first seen preparing to reluctantly marry the lethargic (hence the name) Prince Valium, "the last prince in the galaxy." She angrily asks for her "Droid of Honor" Dot Matrix (who is named after a printing style). While walking down the aisle, Vespa unshockingly gets cold feet and storms off in her luxury starship.

Dark Helmet sees her in range and, realizing she'd be the perfect pawn in acquiring more air for Planet Spaceball, proceeds to try and kidnap her. Vespa calls her father, King Roland, to find someone who can save her. He proceeds to make an offer with Lone Starr and Barf to rescue her for 1,000,000 spacebucks.

Once Lone Starr gets in position, he and Barf jam Spaceball I's radar with a giant jar of raspberry jam, then Barf helps Vespa and Dot board their ship, the Eagle 5. Fighting ensues within Starr's ship with Lone Starr poking fun about how she's a Druish Princess (a play on the archetype Jewish Princess) and Vespa playing that stereotype perfectly. They then enter Hyperactive (parody of Star Wars' Hyperspace) with Dark Helmet using "Ludicrous Speed" in an attempt to catch up.

The Eagle 5 crash-lands on the Moon of Vega, leaving Lone Starr, Barf, and Dot Matrix to try and survive the harsh land. Vespa, in her Druish Princess self, makes the men carry a ridiculous amount of luggage, which they soon abandon in the sand. She softens up during the cold desert night while talking to Lone Starr about love.  The following night, Dark Helmet tracks her down to Yogurt's lair, and kidnaps her and Dot by disguising as her father.

Dark Helmet demands King Roland that he give the code to Planet Druidia's air shield, or else he will have Vespa undergo a nose job that would undo the one she received for her 16th birthday.  Roland gives in, so Vespa gets locked in a dungeon with Dot instead of undergoing the surgery. Lone Starr and Barf travel to Planet Spaceball and free them from their cell.

As Lone Starr and Barf struggle to unlock the Eagle 5 so that they can help Vespa escape Planet Spaceball, Lone Starr hands Vespa a laser gun and tells her to hold off the Spaceball troops pursuing them. She refuses, exclaiming that she hates guns. However, after one of the Spaceballs accidentally shoots her hair, she retaliates by quickly shooting all the troops down.

After Lone Starr saves Druidia and returns Vespa to King Roland, he turns down the 1,000,000 spacebucks, as an expression of his love for her. Hearing this makes Vespa realize that she would rather marry Lone Starr than Valium. Yogurt then informs Lone Starr that he's really a prince, so he proposes to Vespa, and she accepts. 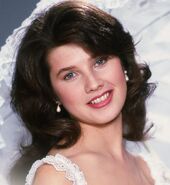