The Trooper with Comb is a minor character in Spaceballs. He is a Ping Pong that was sent to comb the desert (with a

The Trooper was one of the Ping Pongs selected to help 'Comb the Desert' of the Moon of Vega at the order of President Skroob. However, Dark Helmet took the order a little too seriously, equipping his troops with actual giant combs to walk across the desert with. Helmet asked three teams of his men via a megaphone if they'd found anything yet, to which the first and second teams responded no; however when Helmet asked the third team, which the trooper was a part of, the Trooper, disgruntled and tired, exclaimed "We Ain't Found Shit!".

The Trooper only appeared once. Out of the three teams with combs, the Troopers team had the smallest comb, which may have added to his frustration. 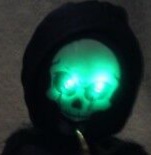