John Candy
Barf is a mawg, a half-man half-dog, and is Lone Starr's companion, (Barf notes that he is his own best friend). His name is short for Barfolomew. Barf is a parody of the Wookiee Chewbacca (Chewie). In the movie Spaceballs, he was played by the late John Candy, who of course did not reprise his role in the animated series.

Once Lone Starr gets in position, he and Barf jam Spaceball I's radar with a giant jar of raspberry jam, then Barf helps Vespa and Dot Matrix board the Eagle 5. Fighting ensues within Starr's ship with Lone Starr poking fun about how she's a Druish Princess (a play on the archetype Jewish Princess) and Vespa playing that stereotype perfectly. They then enter Hyperactive (parody of Star Wars' Hyperspace) with Dark Helmet using "Ludicrous Speed" in an attempt to catch up.

The Eagle 5 crash-lands on the Moon of Vega, leaving Lone Starr, Vespa, Barf, and Dot Matrix to try and survive the harsh desert land. Barf tries to act as a mediator between Lone Starr's and Vespa's arguments. Eventually, Dark Helmet kidnaps Vespa, so Barf and Lone Starr travel to Planet Spaceball and rescue her.

After Lone Starr rescues Planet Druidia, he and Barf receive news that Pizza the Hutt ate himself to death, meaning that they no longer owe him any money. However, after they return Vespa to King Roland, Lone Starr turns down the 1,000,000 spacebucks, as an expression of his love for her. He and Barf open a fortune cookie from Yogurt after getting gas for the Eagle 5, which reveals a message from him. Yogurt informs Lone Starr that the mysterious pendant around his neck is a royal birth certificate, proclaiming him a prince. With this news in hand, Lone Starr proposes to Vespa, and she accepts. Barf attends the wedding as Lone Starr's Best Man (well, Best Mawg, technically). 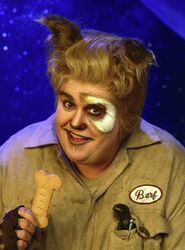